Up to 95% reduction in operational dust, plus over 95% reduction in water consumption, changes everything. Extreme dust control in extreme underground mine conditions is now possible for long periods of time, resulting in greater productivity and safety. Midwest offers solid evidence in the form of scientific proof for the MineKleen® system.

The underground environment is unique with the unusual combination of muddy roads with dust-filled air and moldy conditions. That makes it especially frustrating because your only recourse is more water. Unfortunately, that doesn’t help, creating even more mud.
The dust may be the enemy, but the water’s a close second, making the underground mine one of the toughest work environments possible.

There has to be a better way and there is.

Midwest has taken on this challenge — not with water and the constant stoppages for endless reapplications — but with advanced chemistry and advanced technology in a program created specifically for your most extreme dust control in underground mine situations. Our solution eliminates both the dust and the mud. Now miners can have clean air and clear roads for better health and safety as well as optimum production.

Midwest has invented a complete system to almost completely wipe out dust and reduce the incidence of mold, using the ultimate combination:

Harmful underground dust is finally defeated (even on backs and ribs!).

The MineKleen® Underground Mine Dust Control System is a complete program to combat hazardous dust and toxic mold. So much more than a mere product, Midwest has invented this perfect combination of scientifically proven formulations that are applied using specialized equipment, designed expressly for the underground mine environment and its space limitations.

PROVEN TO REDUCE DUST UP TO 95%

INHIBITS THE GROWTH OF HARMFUL MOLD

Dust is one of a miner’s worst enemies. You can become one of their biggest heroes. Midwest will help you solve significant health, safety and productivity issues with this new MineKleen® system. It consists of:

Midwest’s proprietary, advanced MineKleen® formulations are specific to underground use, carefully crafted to dramatically reduce dust and inhibit the growth of mold. MineKleen® Plus is the optimal recommendation, due to an exclusive binder system to improve service life and reduce applications by as much as half compared to our original formulation. This stabilization advantage is possible because it delivers both an adhesive (a force of attraction between different kinds of molecules) and a cohesive (with the same types of molecules) dust-binding mechanism.

While MineKleen® Basic does not feature those added benefits, it represents an economical alternative for those who want to see for themselves the effectiveness of using the MineKleen® system at a more limited initial investment. Both MineKleen® formulations are environmentally safe and ready to spray.

MineKleen® Sprayer is a rugged and compact spray application system that will fit into most underground shafts. The eye hooks and sled-style bottom provide for easy transport and use underground. The MineKleen® Sprayer saves time and money, as it can spray floors, backs and ribs, simultaneously or separately, applying up to 14 gallons-per-minute while preventing over-spraying.

See how the MineKleen® system works and why it is so important for your underground mine operation.

Midwest’s MineKleen® system works. And there’s nothing else like it.

That’s because it was designed by miners for miners, and Midwest chemists have formulated compositions expressly for underground mines that’s applied with proprietary equipment built for mine access and agility:

> eliminates dust up to 95%
> inhibits the growth of mold
> reduces water consumption over 95%
> reduces diesel emissions and fumes (less vehicle use)
> ensures a safer and healthier environment for miners
> meets strict MSHA regulations and Canadian provincial, territorial and federal regulations

Application frequency of MineKleen® formulations will vary, but in some cases only one application per month is required, virtually eliminating vehicle use for watering. The Midwest MineKleen® solution eliminates both the dust and the mud, while minimizing mold. Now miners can have clean air and clear roads, for better health and safety, as well as optimum production. 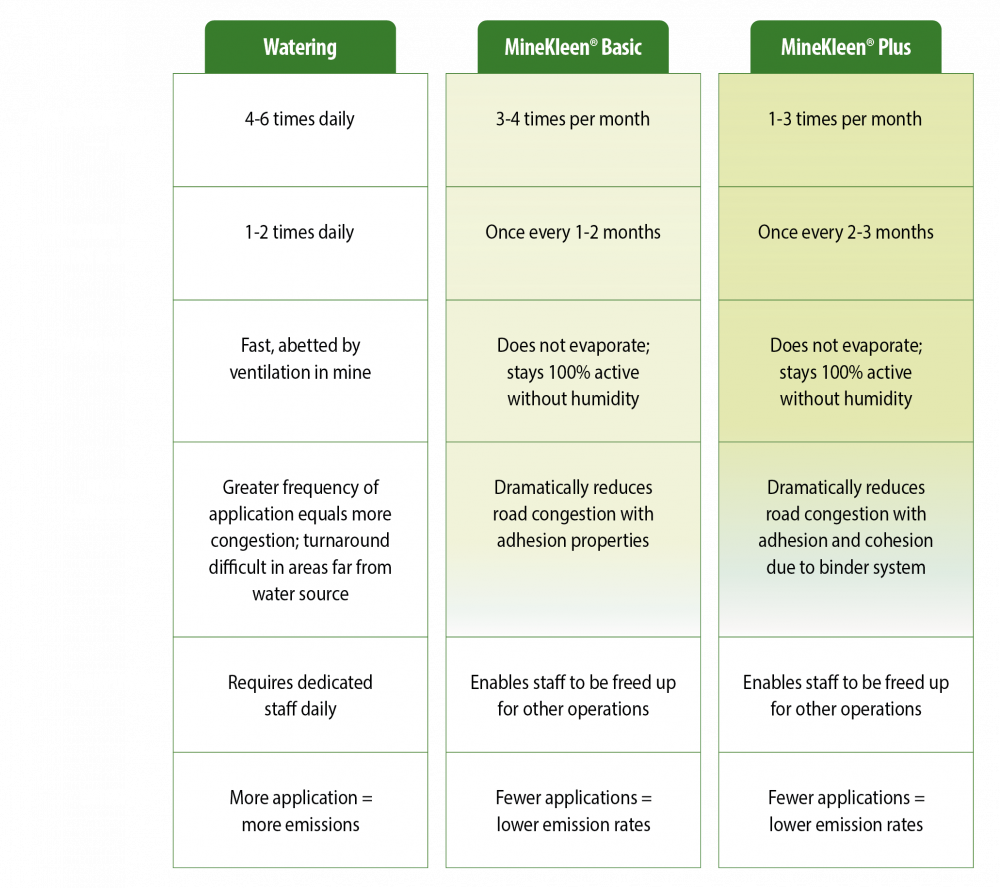 Don’t take our word for it: we have proof of performance.

Midwest leads the industry because we don’t make claims we can’t back up. We always have scientifically supported proof of effectiveness. Download this case study from a real underground mining operation that switched to the MineKleen® system.

Designed by Mine Engineers. For Mines.

The MineKleen Sprayer sprays roads, ribs and backs all in one pass.

Click the arrows below or drag the photo so see how the MineKleen Sprayer is engineered specifically for dust control in underground mines. 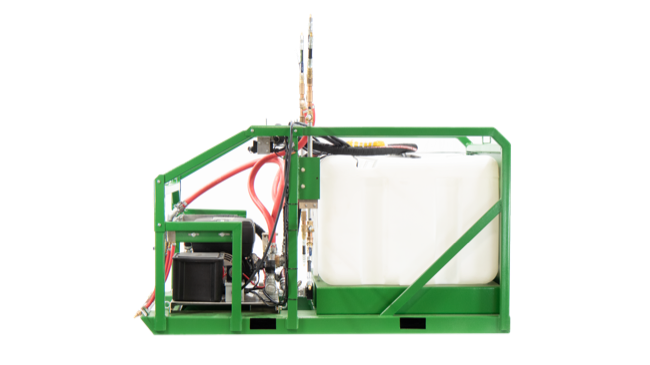 Midwest has been inventing new ways to solve problems in mining operations for 45 years. Mines were our first customers, and we have unsurpassed experience in solving mining operation dust problems. Midwest leads in innovating, with 49 patents granted for cutting edge technology — including designing and building our own application equipment — to get extreme results in challenging mine underground conditions.

We live in a problem/solution world.

> 95% operational dust reduction
> Effective control of dust from roads, ribs and roofs
> Improve your most important, yet invisible, asset (air)
> Enhance safety for underground mine operations

Underground mines are as extreme as it gets. MineKleen® is, too.

Dust control in underground mines is a major challenge. Underground roads bear heavy loads — all day and all night, day in and day out. Conditions can become potentially hazardous. Mud, dust and potholes cause tramming delays and frequent work interruptions that interfere with daily mine workflow and productivity.

That’s why we’ve devoted nearly half a century to finding a better way. Our co-developed MineKleen® Underground Mine Dust Control System, a complete managed service program, ensures improved worker health and safety; guaranteed compliance with governmental regulations; and enhanced relationships with surrounding communities. We focus on understanding your worksite’s unique challenges, and then design the MineKleen® solution best for you, using our independently certified MineKleen® formulations and MineKleen® Sprayer underground-designed equipment that together specifically targets solving those problems.

Midwest’s comprehensive solution has been designed for actual underground mining conditions, with typical outcomes including:

Up to 95% operational dust control

Over 95% reduction in water consumption

The Light at the End of the Mine Tunnel

Midwest collaboratively develops your MineKleen® program — customized and tested on your site.

A product alone is not enough. The Midwest MineKleen® Underground Mine Dust Control System seamlessly integrates into your mine plan for extreme performance results. MineKleen® Sprayer equipment, custom-designed for underground use by Midwest, does the job right to save time and money. For ribs, our system sprays vertical, while spraying roads is done horizontally.

Contact Midwest to learn more about our 100% Satisfaction Guarantee!

FILL OUT THE FORM TO START YOUR DISCOVERY PROCESS

Thank you for submitting your information. A Midwest Mining representative will contact you shortly.