Close
NATURALPAVE SEMI-PERMANENT ROADS
The strength of asphalt roads, while saving up to 70% of the cost.

The environmentally-positive alternative for semi-permanent unpaved roads, from the leading innovators in soil stabilization.

Midwest Can Work With the Most Extreme Soil Conditions

Difficult soils are no match for our patented marginal soil products.

To make these soils effective for use in construction, they require removal, modification or stabilization. Stabilization is the typically the most cost-effective alternative of these three options. Marginal soils can pose workability issues, inadequate strength and stability, moisture issues and dramatic volumetric fluctuations leading to severe and costly failures without proper treatment.

Midwest has mastered the ability to successfully stabilize even the most problematic conditions. Whatever the native soil, our team will use our proprietary 4D process to engineer a solution using our patented product mix.

As the industry’s soil stabilization technology leader, Midwest is driven to deliver superior performance while protecting the natural environment. This is Midwest’s “Third Way,” representing significant improvements over old-fashioned asphalt or gravel alternatives. We construct secondary, unpaved roads that perform like paved roads, yet cost less and can last longer.

Learn more about the advantages of a NaturalPave road by downloading or viewing the full collection of soil stabilization techniques above — including test data, case histories and testimonials, construction and completed project photos and videos.

REAL-WORLD SUCCESSES, IN THE U.S. AND AROUND THE WORLD. 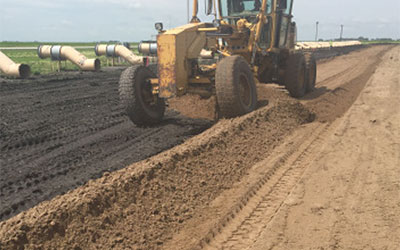 For the largest producer of beet sugar in the U.S., Midwest NaturalPave transformed loosely-composed roads into robust surfaces that will withstand any weather and operating conditions without degradation. Midwest's soil stabilization techniques produced a "sweet" solution. 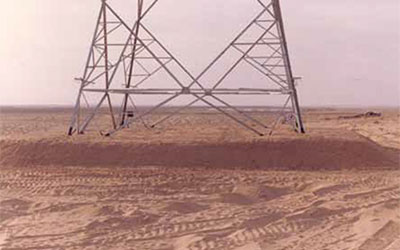 Dust was all around the power tower.

HOW DOES IT WORK?

SAVE MORE WITH EVERY MILE OF ROAD

The old ways cost more in equipment, personnel and material. Compare what it takes to build only one mile to doing so with the “Third Way.”

That’s just a single mile. Think about the sheer magnitude of materials, equipment, time and manpower for every mile of road stabilization you need. With conventional, old methods it becomes a rough road of money lost when compared to Midwest’s “Third Way” — the new way of NaturalPave that utilizes native or in-place soils to save money and effort associated with hauling non-native materials.

THE ADVANTAGES ARE AS STRONG AS THE ROAD SURFACE ITSELF

Long-term stabilization is possible, even while reducing construction time, materials and maintenance the natural way.

Moisture is the enemy. It weakens and breaks apart clay and silt road foundations. Midwest NaturalPave Intresoil is the antidote. It increases bearing and shear strength, stabilizing the problematic material (which means the thickness of the treated layer or overlying pavement layers can be reduced). Best yet, Intresoil is a permanent treatment that will not leach out.

The extra costs associated with potential damage compels a careful process that minimizes or eliminates this risk. In areas where swelling (also known as “expansive soils”) is likely, laws may require soil testing prior to construction. Swelling potential indicates the degree of expansion when the soil is wetted, while swelling pressure indicates the amount of pressure the wet soil exerts on an adjacent solid object.

When expansive soils become wet and expand, damage such as cracking and heaving of the road surface can occur. The risks associated with expansive soils can be significantly reduced through best construction practices like proper ground preparation, to decrease the tendency of soils to swell when wet by changing the clay chemistry and mineralogy to make it less expansive.

A cycle between two problems converge to create a larger problem:

PROBLEM 2: Shrinking — When the clay dries out, cracks form on the surface.

COMBINATION PROBLEM: As these two issues happen in a cycle, this combines to weaken the road foundation.

Why does this happen? The inherent chemistry of the material. Clay is a natural material composed primarily of fine-grain minerals, in fact the finest of soil particles. Its tiny particles have plastic and adhesive properties, as well as small voids and pores that may retain water. In this condition, it tends to expand and shrink, which can lead to settlement, cracking, rutting, heaving and other forms of costly deterioration.

Clay has a high dry strength, but low strength when too much water is present. Due to its minimal permeability, water has difficulty flowing through the tight pattern created by the individual particles, causing it to soften, liquify and loosen.

THE SOLUTION TO PROBLEM 1, 2 AND THEIR COMBINATION

Midwest NaturalPave Intresoil changes the clay chemistry and mineralogy, making it less expansive and serving as proactive ground preparation prior to road construction. The name is based on “intra,” which means within or inside (such as intravenous), symbolizing how Intresoil works within the soil structure for fundamental and lasting performance improvement. This is also known as enhancing the engineering quality of the clay foundation, crucial because a better foundation means a stronger surface.

NaturalPave Intresoil reduces both swelling and shrinking by altering the ion exchange capacity of the clay to reduce the negative charge of the clay. Absorbed water is removed; density is maximized; and compaction is increased. Less effort is needed for compaction and to create a long-term stabilized subgrade or expansive soil layer that prevents water re-absorption.

A chemical bond between Intresoil’s active ingredient and the surface of the clay particles repels water so it is not absorbed. Water moves freely, evaporation is promoted, and drainage is improved, to enhance performance and longevity. Additionally, traffic can be allowed on the treated surface immediately following the final compaction, thus densifying the treated layer to increase its bearing capacity.

Midwest’s NaturalPave Intresoil is ideal for stabilization projects where importing aggregate is costly and impractical, lime and cement is too expensive, and when in-situ material is: 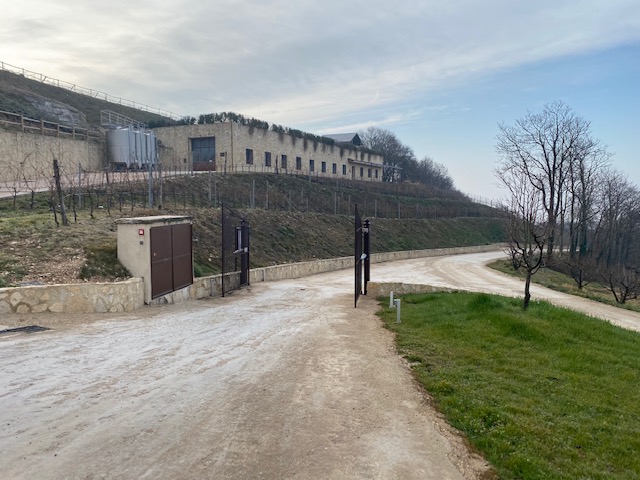 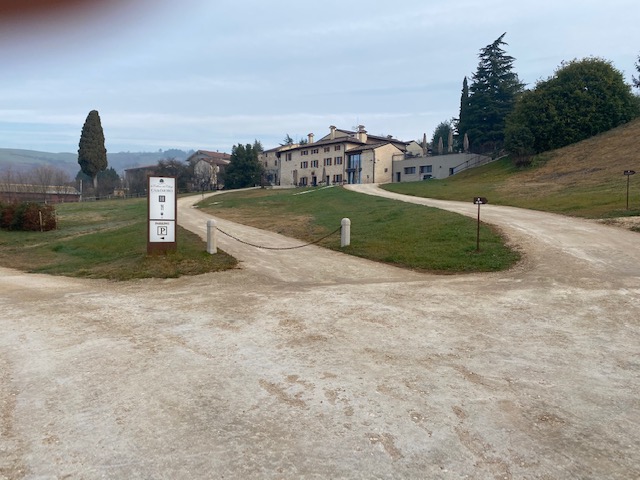 It's Science With a Twist of Clay

SF2 technology is an important tool for establishing operating capability and to increase the expedient use of roads and pads.

SF2 uses synthetic fibers and synthetic fluid binder to create bonds within on-site native soils that enhance compressive strength, CBR, shear strength, material or aggregate adhesiveness or the ability of the construction material to not wash out or roll away during heavy traffic loading. SF2 can be applied year-round, in all weather conditions, in marginal soil types. (Unlike options like Portland cement, SF2 doesn’t even have a cure time, meaning traffic can continue immediately after installation.) SF2 is ideal where there is little natural occurring gravel and the cost to transport gravel to the construction site and mobilization is very expensive.

Perhaps the greatest benefit of SF2 is that in addition to reinforcing the entire soil mass is its unique water-resistant and resistance to freeze-thaw damage. This reduces maintenance costs and offers you a lower cost per mile for your road management budget. And unlike aggregate, where the loss of particulate matter (as dust in dry weather, washed away by precipitation in wet weather) leads to reduced aggregate and lower compressive strength over time, the compressive strength of SF2 actually increases over time with heavy traffic.

Binds soil or aggregate at the molecular level. This increase can be as much as 400% in 30 days
Creates compressive strength that increases with more traffic usage

Cheaper to maintain and easier to repair
Doesn’t cure in the traditional sense, so doesn’t break

Road Stabilization Nanotechnology for the Most Extreme Conditions

When local conditions of temperature, moisture and other inhospitable environmental conditions are too tough for normal stabilization technology to work effectively, we bring in Soil Sement Enhanced Usability.

Soil Sement EU (Enhanced Usability) is a curing and strength enhancing additive that prepares soil to receive Soil Sement Engineered Formula, in a range of impossibly harsh environments where Soil Sement alone can’t get the best results, such as freezing temperatures or high moisture content in soil.

The University of Alaska Fairbanks conducted a study on the use of nontraditional stabilizers for construction of airports in Alaska. Nontraditional stabilizers, such as this two-part system, are vital to construction in Alaska. According to the study, the cost of constructing unsurfaced gravel airports in remote Alaska can exceed $30 million due to logistical constraints and the lack of available gravel. In situ stabilization offers the opportunity to reduce these costs by up to 25%.

As Soil Sement EU cures, it produces high compressive strengths that enable construction using marginal soils such as fine silts and sands in places where gravel is not available or too costly. This third-party laboratory testing performed by the University of Alaska Fairbanks shows SSEU in combination with Soil Sement Engineered Formula increased the unconfined compressive strength of Fairbanks silt from 22psi (untreated) to 640psi.

In the same study, an unconfined compressive strength of 1100psi was obtained in sand with the combination of SSEU and Soil Sement Engineered Formula.

This research demonstrated that strength and bearing capacity enhancements of local marginal soils in Alaska is feasible and cost effective using this two-part system.

Accelerates Curing
SSEU accelerates the curing, or drying, process of Soil Sement Engineered Formula, allowing the soil to be stabilized within 6-24 hours after application.

Increases Bearing Capacity
It increases the bearing capacity of marginal soils to the design strength needed.

Allows Application in Freezing Temps
It allows Soil Sement Engineered Formula to be applied in freezing temperatures (down to -10°C) and in soils with high moisture content.

When Extreme Conditions Exist
Ideal when extreme compressive strength is required, rapid strength improvements are required, or the constructed surface must be fully operable within 24 hours after installation.

WANT THE MOST ADVANCED SOIL STABILIZATION TECHNOLOGY IN THE WORLD?

Thank you for submitting your information. A Midwest representative will contact you shortly.